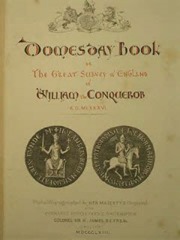 Only a few families can truly trace their surnames to the “Domesday Book”, and even fewer can go back even tentatively to the pre-Conquest Anglo-Saxon era. The only families that have been able to prove an ancestry to Anglo-Saxon ancestors are the Arderns from Aelfwine and the Berkleys from Eadnoth.

Mainly this is due to a lack of records, but for most of us, it is also due to the fact that hereditary surnames were restricted to the great land owning families. The average person did not need a family name, as they lived in villages where everyone knew your name.

Most of these early hereditary surnames were derived from the locality where the family had their chief residence. For example, amongst William I’s barons at Hastings were William de Warenne from Varennes near Dieppe and Ilbert de Laci from Lassy, south of Bayeux.

During the two centuries or so that followed the Conquest most major landowning families and many knights adopted hereditary surnames, especially if they lived in the south of England, most of these hereditary surnames being derived from the place of origin of the family.

During the Middle Ages everyone began to adopt hereditary surnames. One of the largest categories of surnames is that which is derived from personal names. Some of these surnames, such as Paul or Thomas, derive directly from the personal name of the father of the man, who was the first in that line to adopt a hereditary surname. Others have –s or –son added as a suffix to a personal name, e.g. Roberts, Williams, Jones (so of John) or Johnson, and yet others are prefixed by the Norman Fitz-, the Gaelic Mac or Mc, or the Welsh ap or ab, all of which mean “son of”.

Another large group of surnames, which became popular amongst the lower classes, is derived from occupations or from an office, rank or status. By the beginning of the thirteenth century, the more common occupational surnames, such as Smith, Taylor or Wright were already numerous.1